A unique development opportunity at a high-profile site near Penrith has hit the market. 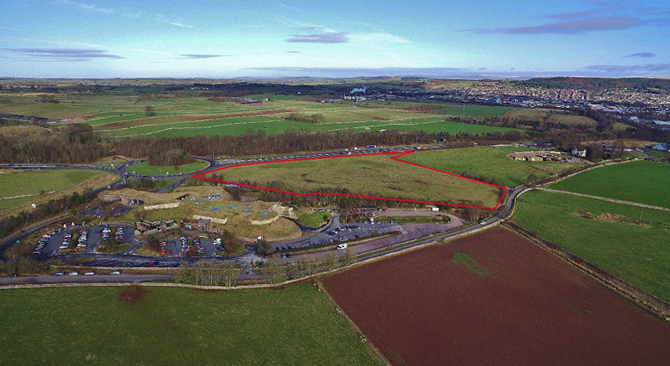 The seven-acre site next to the A66 and Rheged Centre in Redhills, near Penrith, is being marketed as a place for a hotel, leisure or commercial development, subject to planning permission.

Site owner Eden District Council is looking to secure either a sale on a long-leasehold basis or a joint venture with an end occupier, for whom it will develop a “turnkey” building as part of a leaseback scheme.

The land is not currently allocated for leisure or commercial use, but the council said it would look favourably on any appropriate and sympathetic development that relates to the surrounding area and is similar to buildings close by.

The site, which is also bordered by agricultural land and is near Redhills Business Park, has come on the market after being deemed surplus to requirements by the council.

The price would depend on whether the land is sold or if a joint venture is secured, said chartered surveyors Edwin Thompson, which is marketing the opportunity.

It sits on the A66 – and is just a mile from the M6 motorway, and close to the West Coast Mainline, and the wider national railway network, at nearby Penrith.

John Haley, commercial partner at Edwin Thompson, said: "The land at Redhills is a unique and exclusive opportunity, offering over seven acres of prime development land located at the main northern gateway route to the Lake District National Park, which in 2016 received over 45 million visitors.”

Interested parties have until June 14 to submit offers and proposals for the land to Edwin Thompson.

Eden District Council said it aimed to have all proposals appraised quickly, so that recommendations can be made to councillors at some point later in the summer.